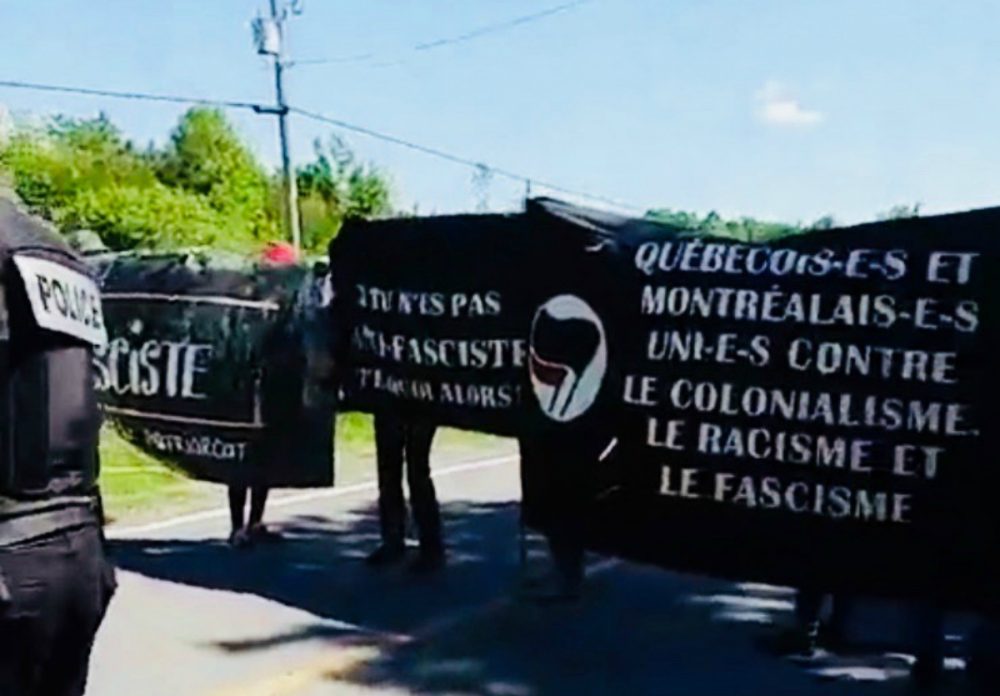 June 3rd, 2018 – Faith Goldy had called a rally at the Roxham border (U.S/ Quebec) attracting roughly 100 far-right groups and individuals from Ontario and Quebec, as well as a few stragglers from as far away as Alberta and Nova Scotia. This is the first time this sort of collusion between provincial groups has ever been observed at the border here.

Faith Goldy is currently one of Canada’s most prominent far-Right internet personalities. She appeals to both populist forces concerned primarily about “illegal immigration” and “the Muslim threat,” as well as to actual fascists and neo-Nazis. Not only has she not eschewed the latter, she has made a point of pandering to them, i.e. repeating and defending the 14 words (a neo-Nazi slogan), joking with people from the Daily Stormer in Charlottesville, and being an avid defender of “identitarianism” in Canada, including promoting the Alt-Right Identity Canada group. More on Goldy here.

Goldy’s fame spiked in far-Right circles recently, when she filmed herself being spat on and ejected from an antifascist counter protest at the Quebec/U.S. border at Lacolle a few weeks earlier. Many who had never heard of her before, especially within the Quebec far right, took notice, and the June 3 rally suddenly took on greater importance for their forces.

Those who showed up on the 3rd represented Goldy’s range of appeal. There were members of the Proud Boys from Ontario, along with other far-Right internet media warriors, such as Ronny Cameron (self-described “white nationalist” and supporter of the Alt-Right), Alex Van Hamme (Free Bird Media), and Georges Massaad (The Phalange Media). The bulk of those who attended the rally were from Quebec, though. Despite the fact that Goldy had essentially snubbed Quebec organizers, not responding to overtures from Dave Tregget and Sylvain Lacroix, and that her call for “patriots” to bring Red Ensign flags alienated some Quebec nationalists, there was a significant showing of individuals associated with Storm Alliance, Atalante, la Meute, and even the Front Patriotique du Quebec (which had officially disassociated itself from the rally due to the sensitive “red ensign” issue).

In her promo videos, Goldy had asked attendees to be on their “best behavior” but she certainly did not object to Threepers showing up at the Fisher and Roxham Rd intersection, dressed in full tactical gear, to patrol the area. The suggested violence is not lost on observers, the intersection looked more like a militarized zone than a pro-borders demo. But, that’s just the thing–the very presence of far-Right demonstrators and known neo-Nazis is violent. Their fetishized need to patrol settler borders on stolen Indigenous lands reveals them for the white supremacists that they are and the infrastructures of white supremacy they uphold (i.e. borders, anti-migrant legislation, detention centers, safe third-country agreement).

In the past, anti-fascists have publicly called counter-demos. We are often pushed out of the way by SQ riot cops in order to make way for far-Right groups. This time, we made no public call out. Instead, we waited to position ourselves at a strategically advantageous point along Roxham Rd and proceeded to set-up a highway blockade. Our numbers were small, we intentionally chose to be so. Our objective was to concretely disrupt their demo for as long as possible. This was an experiment, one that we are still evaluating.