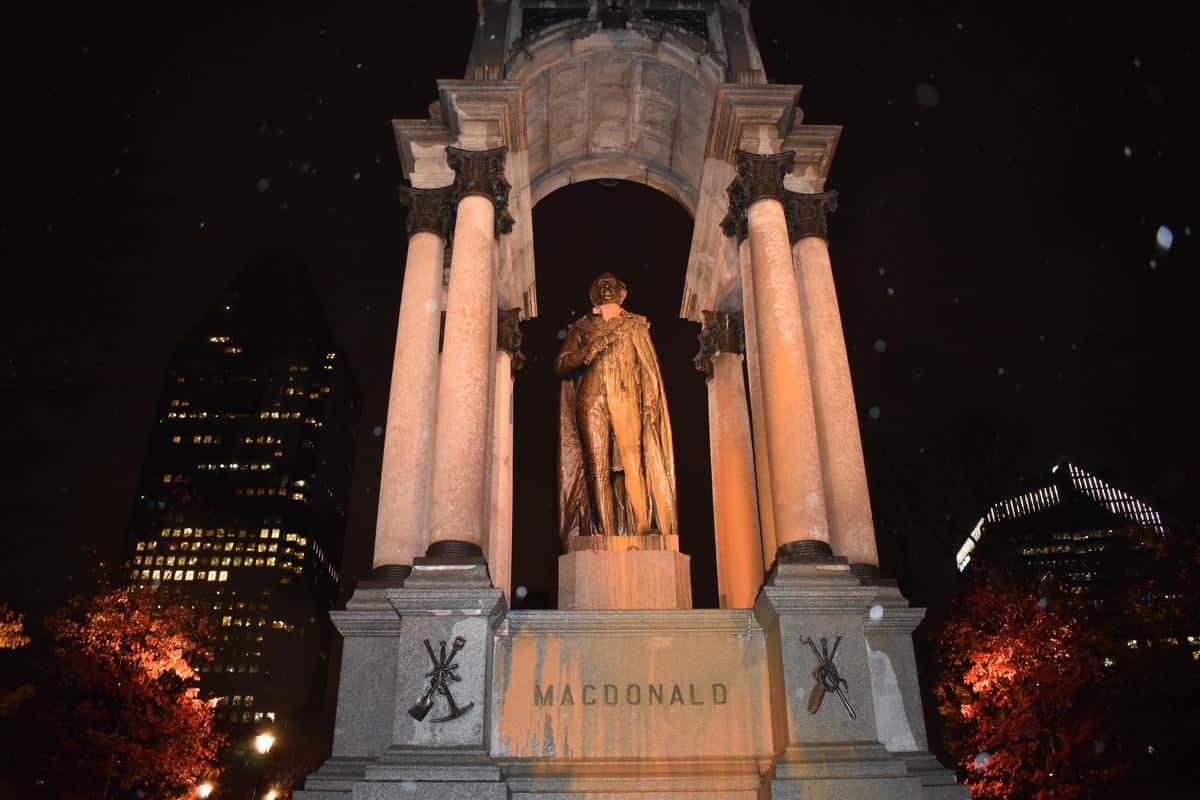 Halloween, October 31, 2019, Montreal — The living dead attacked the John A. Macdonald Monument with orange paint last night, during an action being claimed by anti-colonial zombies.

The zombies rose up from the Old Saint-Antoine Cemetery (1799-1855) that is located underneath what is now called Dorchester Square and Place du Canada, where the Macdonald Monument is located and was unveiled in 1895.

The anti-colonial zombies issued the following media statement for the living, shared anonymously with some autonomous media outlets in Montreal:

“All Hallows’ Eve 2019. To the living –We are the dead that you have forgotten.

Our skeletons, buried between 1799 and 1855, remain here in the thousands.

You have covered us in asphalt, concrete and colonial-themed parks. You have desecrated our memories with monuments to the architects of genocide, like the racist John A. Macdonald, who attacked the culture and traditions of the Indigenous peoples of Turtle Island.You, the living, have failed.

You continue to allow the Macdonald Monument to stand in a prominent public location in Montreal, on our dead bodies, as a symbol of white supremacy and brutal colonialism.The several attempts by living anti-colonials to attack the racist statue and have it removed have clearly failed.

So, we, the living dead, what you call zombies, are taking action. We have risen to attack the monument in orange paint. Orange represents both our sacred day, what you call Halloween, but it’s also an appropriate way to desecrate the Orangeman John A. Macdonald, who was a member of the racist and anti-Catholic Orange Order. After all, the skeletons underneath Dorchester Square and Place du Canada are overwhelming Irish Catholic migrants, many of us victims of the vicious cholera epidemics of the 1800s.

We will rise again, to attack this statue, unless it is removed, or unless you let our paint attack remain, as a clear sign that this statue is contested, by both the living and the dead.

We, the dead and undead, are not subject to your laws.

We, the dead and undead, have deep memories and motivations.