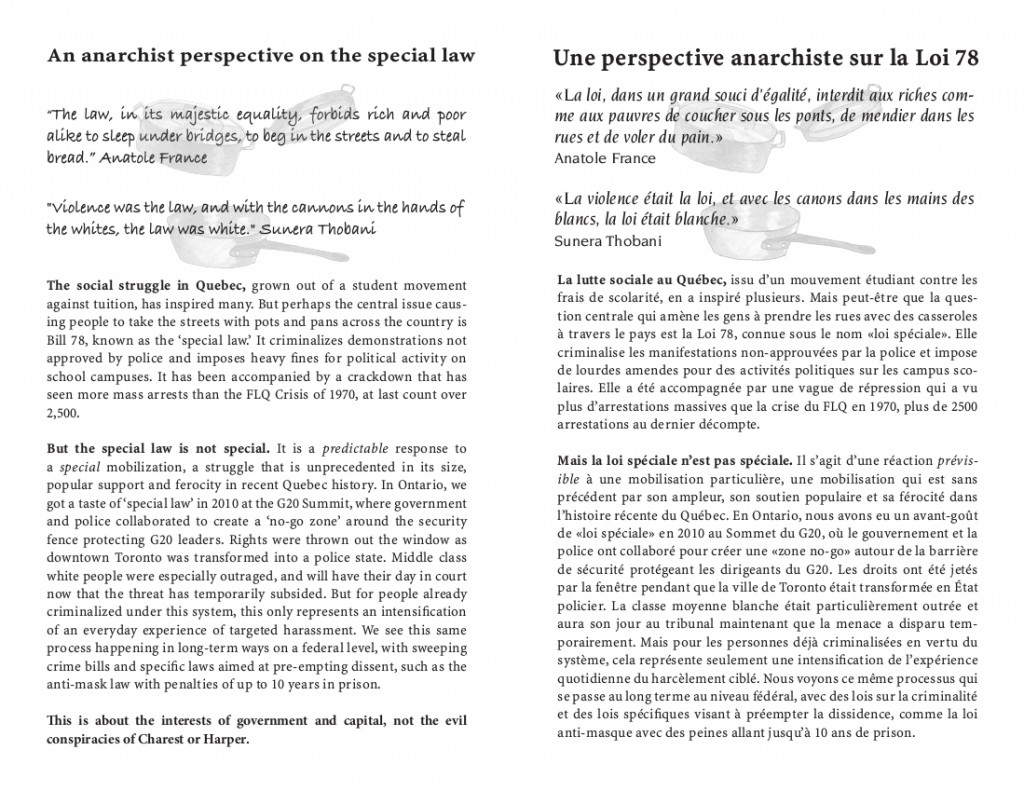 “The law, in its majestic equality, forbids rich and poor alike to sleep under bridges, to beg in the streets and to steal bread.” Anatole France

“Violence was the law, and with the cannons in the hands of the whites, the law was white.” Sunera Thobani

The social struggle in Quebec, grown out of a student movement against tuition, has inspired many. But perhaps the central issue causing people to take the streets with pots and pans across the country is Bill 78, known as the ‘special law.’ It criminalizes demonstrations not approved by police and imposes heavy fines for political activity on school campuses. It has been accompanied by a crackdown that has seen more mass arrests than the FLQ Crisis of 1970, at last count over 2,500.

But the special law is not special. It is a predictable response to a special mobilization, a struggle that is unprecedented in its size, popular support and ferocity in recent Quebec history. In Ontario, we got a taste of ‘special law’ in 2010 at the G20 Summit, where government and police collaborated to create a ‘no-go zone’ around the security fence protecting G20 leaders. Rights were thrown out the window as downtown Toronto was transformed into a police state. Middle class white people were especially outraged, and will have their day in court now that the threat has temporarily subsided. But for people already criminalized under this system, this only represents an intensification of an everyday experience of targeted harassment. We see this same process happening in long-term ways on a federal level, with sweeping crime bills and specific laws aimed at pre-empting dissent, such as the anti-mask law with penalties of up to 10 years in prison.

This is about the interests of government and capital, not the evil conspiracies of Charest or Harper.

If we exceptionalize Bill 78, we ignore the fact that the law is a set of tools and weapons governments use to entrench the interests of the powerful, control and regulate the general population, and wage war against the ungovernables. The Canadian state is founded on the genocidal conquest of indigenous nations and land, and concessions such as the Charter are desperate attempts to create legitimacy where there is only a ruthless violence underpinning ‘Canada’. So we shouldn’t be shocked when we see these same rights instantly evaporate in a ‘crisis’. And in these times of social upheaval and economic austerity, we are approaching perpetual crisis.

Focusing on a particular law or appealing to rights risks going on the defensive and getting drawn into a conversation with our enemies. It paints the movement as powerless victims. We should be inspired to action not just by images of police brutality, but also by images of masked rebels chasing riot police. Now is the time to build our grassroots power, prepare for repression, support those targeted by the state, but most importantly to go on the offensive.