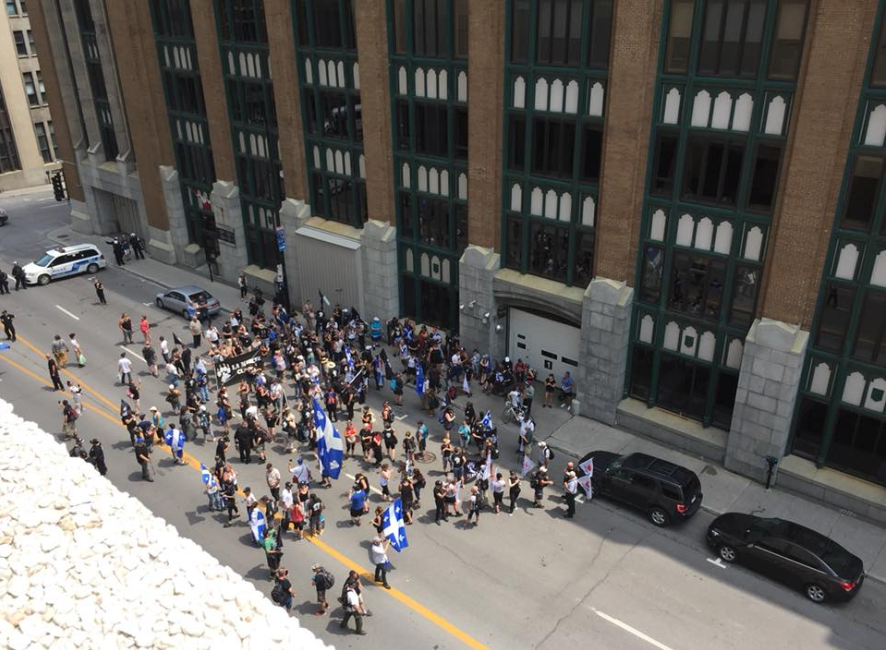 The leader of La Meute – Sylvain « Maikan » Brouillette – promised “the best demo in its history”. It was a monumental fiasco:

(1) While La Meute claims to have 60,000 members, the exact number in the real world is more like 150… Buses came from as far away as the Saguenay. Adding up all their most devoted fans, La Meute was unable to gather more than 200 people, which includes their allies in Storm Alliance and Independence Day. What a shame for Mr. Brouillette!

(2) Not only was it not the largest march in La Meute’s history, they didn’t even manage to march a single block!

Though their leaders proclaimed, “Quebec takes Montreal by storm” and “We will march with heads high”. In truth, for most of the time, they stayed seated in the entrance to a parking lot for almost 4 hours, before finally heading home in their school buses…

What happened? Counter-demonstrators posted up on both sides on rue Saint-Antoine, such that La Meute, with their inferior numbers, never had the courage to take the street and make their voice heard (that is to say, their hatred of immigrants and Muslims).

Sylvain “Maikan” Brouillette’s moment of glory took place when he walked up to the wall in front of him, to brush the end of his flag against an Immigration Canada signboard. Not even his own side ever understood what he was trying to do:

What’s for sure, the leaders of this hateful group retreated in front of the counter-demonstrators. Their security cell hid behind the riot police lines, while the majority of their members stayed seated, suffocating in the parking lot entrance, in the shade, and asked for water.

The anti-immigration group Storm Alliance is also in decline, being unable to assemble more than 20 people. Just three S.A. flags were seen, but at least their devotee Mr. Dionne was present, he who displayed a Nazi flag at the demo last year in Quebec City:

As for Independence Day, one could hardly spot ten members, displaying their hallucinatory flag featuring the colors of Quebec, Canada, and the American Statue of Liberty (?), all while adding a spelling mistake in the English word that is normally written “Independence”…

This group is known for counting an ex-Grand Dragon of the Quebec Ku Klux Klan among its members, Michel Larocque. CTV embarrassed La Meute’s #2 by questioning him on this subject:

“Roch adamantly denies that Larocque is a member of their movement.”

“[He] is not a member of La Meute. La Meute is one entity,” Roch explained. “We accept groups that are not right-wing. That’s why we accept the Storm Alliance and Independence Day.”

Roch’s excuse is a bit too easy, arguing that Larocque is not directly a member of his group. What he leaves out is that he was part of it in the past, even having a La Meute tattoo on his left hand:

In general, the media gave more speaking time to the far-right’s spokespeople than to the anti-racists, despite the latter being much more numerous. These outlets, such as TVA Nouvelles, displayed an obnoxious tendency to relay their words without critical outlook, going as far as affirming the expression “illegal immigration” in their reporting:

The media should be careful to not so blindly relay xenophobic ideology. As the La Presse report reminded:

“La Meute and Storm Alliance denounce the arrival of irregular immigrants who they describe as “illegal”. However, this status doesn’t exist in accordance with the 1951 Refugee Convention. Every person has the right to cross the Canadian border in irregular fashion to request asylum.”

La Meute finds itself at a crossroads, faced with its own lies, not even knowing anymore why it’s protesting. Where is their so-called fight against radical Islam, when the word “Islam” wasn’t spoken a single time yesterday? (and this is for the best)

While their leaders said their march was going to make the “voice of the people” heard, they prohibit their members from bringing their own signs and chanting their own slogans (they might sound too racist)… Brouillette calls them “silent marches“.

La Meute doesn’t represent the people. It just represents a guru, who lies with every breath, named Sylvain Brouillette. 60,000 members? More like 150…