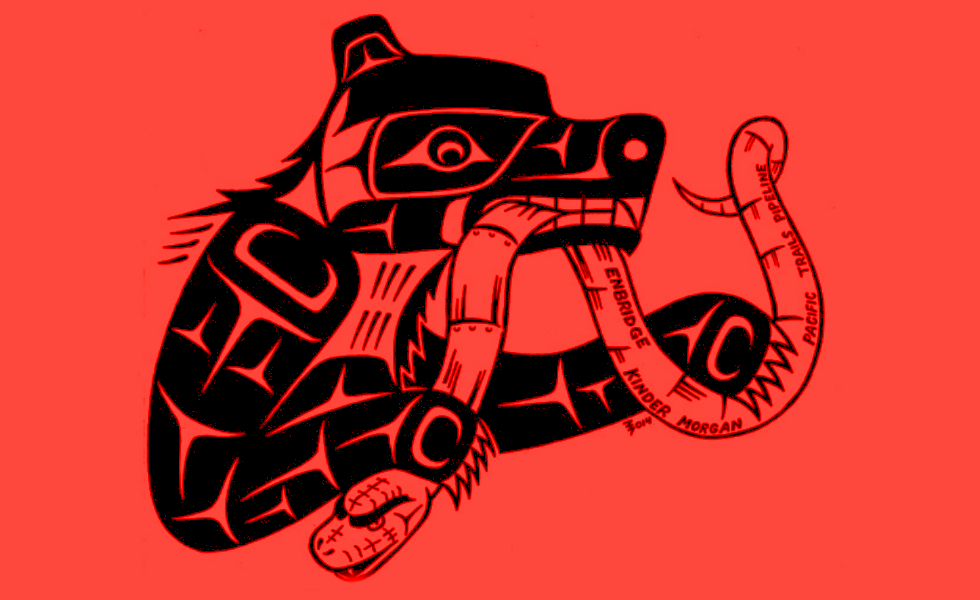 This year, Canada is celebrating its 150th year of colonial existence, and Montreal its 375th. Throughout the next year, we’re going to be celebrating the histories of resistance to the colonial project of Canada, by continuing to bring them into our struggles in the present. This is a call for anarchists across the territory of so-called Canada, and everyone fighting against colonial society, to combine our diverse capacities to fight this ongoing nightmare in all the ways that we can.

The project of Canada has been one of ongoing genocide against indigenous people through various forms, from the intentional spreading of small pox to the conditions that create staggering numbers of missing and murdered indigenous women and men. Canada attempts to impose dependence on colonial society by destroying the autonomy of indigenous people to live off of their land base (through the reservation system), and through cultural genocide to instill generational fracturing and collective amnesia (institutionalized through the residential school system up until the 90s).

We want to sabotage the machinery that makes this colonial legacy function. This machine’s infrastructure and development projects of exploitation mean devastating the land that all life is nourished by. It means the policing apparatus of Canada, from the onslaught at Gustafsen Lake to the widespread sexual violence against indigenous women by the SQ. It means the projects of social control necessary for Canada to function; the systematic forced sterilization, the reservation system, and the mass incarceration of indigenous and black people. This machinery is also social – the social identification with the city, the nation and with whiteness.

375: Montreal comes alive! is a tourism campaign where each neighbourhood of Montreal has been allotted money by the State for their celebrations. This will be used as an opportunity to further gentrification and social cleansing, and to normalize the State’s narrative of a benevolent and inevitable colonization. The program of events, and promotional videos, primarily feature white francophone artists and musicians – demonstrating who they’re staking their bets on in this new project of development and control through nationalist and hipster artists and Quebec popular culture. Though this campaign is unabashedly white supremacist in who they are trying to mobilize, we’re also overly familiar with the script of Canadian multiculturalism – of representing and integrating different identity categories into the genocidal project, for a more insidious social control.

At the very least, we can show that there are people who Canada is attempting to integrate into this white supremacist framework who are in rebellion against it. Let’s find whatever ways that we can to connect across the segregated lives that we feel every day. Through such connections, we can look toward creating a project of rebellion that people can identify with, outside of the right hand of white nationalism, and the left hand of liberal multiculturalism.

Here are several ideas for how people can self-organize to respond to this call:

– Disrupting the festivities of 375 and 150, in every neighborhood of Montreal and across Canada.
– Fostering relations of solidarity between people who want to fight the project of Canada. In this, we think it’s crucial to not reproduce passive ‘ally’ politics, where ‘allies’ don’t carry their own reasons for fighting. Everyone has a stake in defending the land from colonial destruction. For anarchists, we have innumerable reasons to fight and be in reciprocal solidarity with anyone struggling against the borders, police, resource extraction, and the economic domination that Canada requires. We think that statements like ‘being an ally to indigenous people’ is contradictory and meaningless when we recognize that homogeneous categories of people don’t exist. In fact, there are often conflicts within indigenous communities around goals and tactics that shouldn’t be sidestepped. For instance, at Standing Rock the Red Warrior Camp (which employed confrontational and disruptive tactics against the pipeline) was asked to leave the camp by the chiefs who condemned any action outside of non-violent civil disobedience that appeals to white and media legitimacy.
– Creating counter-information to communicate anti-colonial perspectives.
– Confronting, disrupting, attacking all manifestations of the colonial order: the functioning of the capitalist economy, resource extraction projects and infrastructure, the repressive apparatus of police and prisons, the dominant narratives of colonialism (in statues, museums, churches, etc.), and however colonialism is being maintained where you live.

The existence of Canada and Montreal is inherently a project of control and ecological devastation – this is what ‘progress’ and ‘development’ looks like. These processes further fracture any semblance of community that we can even try to nourish, which in turn profoundly impacts our capacities to rebel. We want to break with the social relations of production, consumption, citizenship and whiteness. We want to create the possibility to live different relations, which also means creating opportunities to be uncontrollable. We want to disrupt the narrative celebrating a benevolent and friendly Canada. Let’s fuck with them at every turn. Let’s shut down Montreal, let’s shut down Canada.